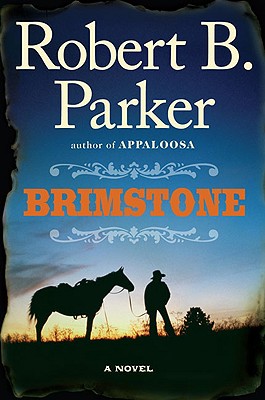 "New York Times"-bestselling author Robert B. Parker takes aim at the Old West with this brilliantly crafted follow-up to "Resolution" and "Appaloosa," again featuring guns-for-hire Virgil Cole and Everett Hitch.
W hen we last saw Virgil Cole and Everett Hitch, they had just put things to right in the rough-and-tumble Old West town of Resolution. It's now a year later, and Virgil has only one thing on his mind: Allie French, the woman who stole his heart from their days in Appaloosa. Even though Allie ran off with another man, Virgil is determined to find her, his deputy and partner Everett Hitch at his side. Making their way across New Mexico and Texas, the pair finally discover Allie in a small-town brothel. Her spirit crushed, Allie joins Everett and Virgil as they head north to start over in Brimstone. But things are not the same between Virgil and Allie; too much has happened, and Virgil can't face what Allie did to survive the year they were apart. Vowing to change, Allie thinks she has found redemption through the local church and its sanctimonious leader, Brother Percival. Given their reputations as guns for hire, Everett and Virgil are able to secure positions as the town's deputies. But Brother Percival stirs up trouble at the local saloons, and as the violence escalates into murder, the two struggle to keep the peace.
As sharp and clear as the air over the high desert, "Brimstone" proves once again that Robert B. Parker is "a force of nature" ("The Boston Globe").